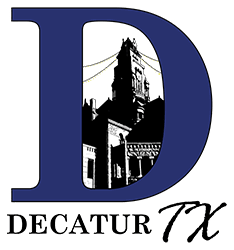 The First Flight in Decatur
An Excerpt from the New Main Street Book
Jay Ingram established Ingram Motor Company, Decatur's first automobile dealership in 1911 in the north stone building on Block 8, lot 3. In 1914, on a trip to Dallas, Ingram met Charles A. Foster known as "Lavivian", Foster who was a Houdini of sorts held license No. 41 in the Aero Club of America which included flight pioneers such as the Wright brothers, Glenn Curtis and others.

"Ingram was so fascinated with Foster's stories of flying that he
asked the airman-wizard to come to Decatur and build a flying
machine." (June 6, 1942 Star Telegram)

The whole Ingram family then got involved. The first plane was constructed on the second floor above the car dealership. Dr. John J. Ingram, Jay's father was the primary financial backer. Brothers Aubrey and Selma worked on the craft as well and all three brothers eventually became pilots.

Foster, with no plans or blueprints, built the plane from memory using spruce for the frame and covering the fabric with a mixture made by dissolving celluloid in ether. The motor, a six-cylinder open port Roberts was purchased at a cost of $2500.00. Due to its rear mounted propeller and Curtis parts, it is today called a Curtis pusher. The first flight in Decatur was in the Spring of 1915.

"no little excitement was caused on the public square when a curious
crowd ran hither and thither and looking skyward to get a glimpse
of the first airship that ever passed over Decatur. Mr. Lavivian started
his flight from the Brewer pasture east of town, circled over the city,
passing over the Ingram garage."

Crating the planes in boxcars, Ingram and Foster called themselves the Pioneer Aeroplane Exhibition Company, taking the planes to county fairs all over Texas, Oklahoma, and Arkansas.

The Advent of WWI ended their barnstorming days by making airplanes commonplace. In total, 5 planes were built in the Ingram and foster partnership. Stored in a barn for 70 years behind the home of Aubrey and Mildred Ingram, the one remaining craft was purchased by collector John Bowden of Lampasas in 1986. Bowden restored the plane and later sold it to the Albuquerque Museum and the Albuquerque International Airport. It remains on display at the Airport to this day as the best preserved pre- WWI aircraft in the world.